Nearly 20% of the American population suffer from some form of mental illness each year. This is a rampant epidemic. Everyone is affected directly or indirectly.

See Nearly 1 in 5 Americans Suffers from Mental Illness Each Year article in Newsweek.

It is the same story (or worse) in other countries.

There is nothing special about mental health issues, as compared to other types of health issues. We are organic beings and our brains are “made of stuff” just like everything else. Sometimes they don’t work as they should. Very often, in fact 🙂

But the stigma is real.

You’re mad! You are crazy! You are a lunatic!

But worst of all is … You are a liability. I cannot trust you. You cannot do your job. You are a disappointment. Why don’t you just snap out of it? Cheer up. It can’t be that bad. You aren’t even trying.

I have suffered from serious spells of depression for the last 12 years, but in retrospect can see that this began as far back as my teenage years. It has likely always been an aspect of my biology – but only one which manifested in seriously self-harmful ways under stress.

I have lost months of my life to the Black Dog (probably around two years cumulatively) where even getting out of bed or doing ANYTHING other than avoiding the world was a challenge. Defer. Avoid. Hide. Sleep. Don’t eat. Constantly worry and self-reflect.

But it is bullshit. It is all bullshit.

Sure, we hit hard times, but what is happening with mental illness is not logical. Your brain just isn’t working correctly. Or, as a “user”, you are using it in a way which makes these issues more likely.

For somebody whose work is thinking and logic and problem solving, mental health episodes are devastating. I can attest to this first hand.

The thing which I do, which I am best at, which is my very essence… Can’t do that right now, and it might be months before I can.

My most recent spell of depression lasted from October 2016 to early January 2017. I was basically “off the grid”. It started with this, which utterly knocked the stuffing out of me:

I joined ConsenSys to start working on Enterprise Ethereum Alliance but within less than a week it was clear to me that I was broken and needed to take some time off. Like all my previous bosses, Joe Lubin was superbly supportive, as were my other new ConsenSys teammates:

By mid-December 2016 I felt able to join a dial-in call for a face-to-face meeting in NYC talking about preparations for the EEA. That was the first time I had popped my head up for about two months. I was just lurking on a call, but it was a good start.

On January 10th 2017 we had another face-to-face meeting about the EEA, including presenting our roadmap to Vitalik. The prospect of being in these meetings was really intimidating, but it really helped in the end. My beard here was a hiding method. 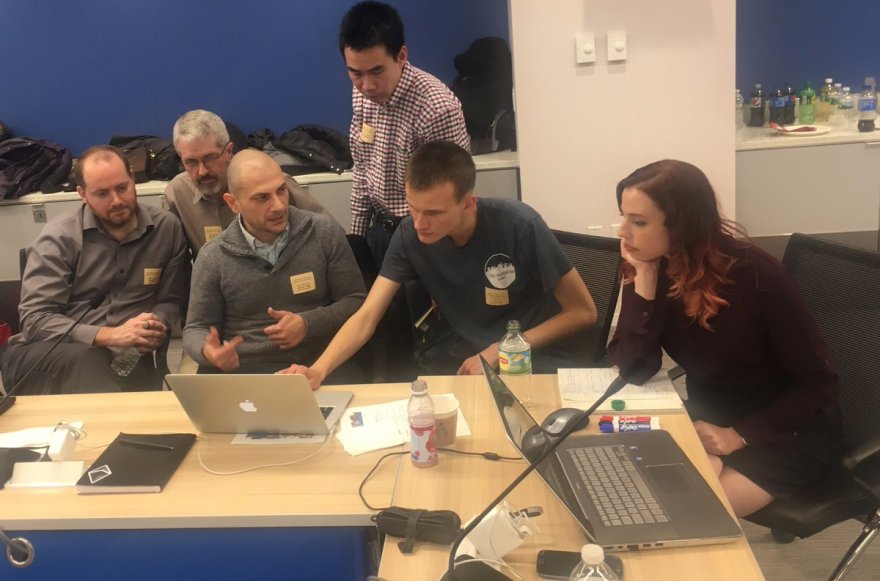 Anyway … I just wanted to share this insight into my life because mental health affects us all. I want you to know that nobody is immune. People in very public and influential positions are just as prone to mental health issues as everybody else.

I expect to suffer from spells of depression for the rest of my life. I have been taking antidepressants for years. They probably help, but are no silver bullet. Some people find CBT very helpful.

I have been to a psychiatrist (who actually quit the profession because he came to the conclusion he was hurting people more than helping them, by “medicalizing” the issues.

There is a huge waiting list here in BC. Waiting 6 months to talk to somebody when you are in the pit?

I have been to a psychologist, who was more helpful, but was $200 per hour and not covered by medical.

I have been to a Psychic/Medium/Medical Intuitive (over Skype). That was actually the single most useful session I ever had in terms of personal impact.

Perhaps THE biggest uptick I had in my whole life though was making a good new friend who told me all about blockchain, and who inspired hope in me that I could use my professional experience to make a major difference in the world. That is the path I am still on.

Drinking heavily and smoking was helpful too (in the very short term!)

When you are heavily depressed you don’t enjoy things as much as you did, so battering yourself with “experience” in that way can help to spark you a little.

I imagine that going on a hedonistic rampage would be “helpful” too, but with a wife and kids that really was never on the agenda for me!

ANYWAY – If you are having a tough time yourself and feel that talking it through with me would be helpful (whether or not we know each other), please feel free to HMU.

Seriously. Open offer to the whole world. My DMs on Twitter are open.

I am feeling great now. I am utterly inspired and enthused by Sweetbridge.

But I know that it won’t last forever, and the Black Dog will likely come and visit me again at some point in the future. But I am slowly getting better at coping. Peace out!